Welcome to the online home of the British International 6mR Association.

Over 1,200 6 Metre boats were built in total, of which some 450 are still in existence today, and the UK has one of the largest fleets. Early Fife boats built in 1907 are still racing – often against new Moderns. Some classics have been beautifully modified for cruising; several race regularly.

The class covers a wide range of sailing, whilst at the same time retaining the heritage of international racing in thoroughbred boats that don’t have to break the bank. All have one thing in common: their distinctive sailing silhouette and an adherence to a tried and tested formula. A tribute to the designers and builders. There is no doubt the class generates a passion and devotion driven by the stunning appearance of the boats and their historical significance.

Now more than 100 years since the first rule was written, metre boats have been at the forefront of yacht development ever since – they were amongst the first boats sailing in the Olympics, right from the 1908 London Olympics until 1952 in Helsinki, 6mRs were also used for the British-American Cup (team racing and an event far more prestigious than the America’s Cup in its day), the Seawanhaka Cup (Match racing) through the 1930’s.

Of the other international rule classes, the 8mRs have been first choice boat for most of European Royalty, some of the 23mR were converted to ‘J’-class yachts and the 12mR were the boats used to challenge for the Americas Cup for 30 years once racing started again after the war and until a more modern derivative was designed.

Hull designs have always been technologically advanced. Wing keels, rod shrouds and the latest in sail design and build on the Moderns contrast with the ageless wooden decks and fittings of the Classics. Both classes sail together; often the faster Classics mixing it with the Moderns. There has been a real resurgence of interest with many old boats being restored, new boats being built and some of the mega-stars of the sailing world choosing metre boats for their personal sailing. The International Six Metre Association has members in most European and American sailing centres. 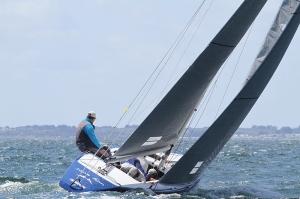 The UK 6mR fleet is largely based in the Solent with another group of boats in the West Country. The programme is devised to provide maximum opportunity to sail together consistent with the ability of the boats to get to each venue by sailing or transport. Many boats have a 7.5ton lorry which is sufficient to move the boats and at each venue launching facilities are organised.